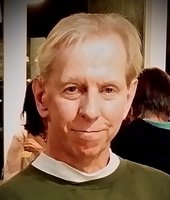 Wianecki, Michael Andrew, 69, died peacefully with his sister by his side on Sunday, June 14, 2020.  Mr. Wianecki was born in Newark and raised in Lyndhurst until his freshman year of high school when the family moved to Hillside, NJ. He enlisted in the Army during the Vietnam era, stationed in Colorado, Washington State and Germany.  He was a Long Haul Truck Driver for Mario’s Express Trucking until retirement.  Michael was an avid pool player & Elvis Presley fan, spent summer vacation at the Jersey Shore every year as a child.  He loved pizza, Italian food and Italian Ice. Michael had plans upon retirement to RV the country, stopping at all the places he couldn’t with his truck, but became ill and moved to be closer to his sister in Hollister, California. He is predeceased by his parents, Anatol Victor Wianecki & Sophie (nee Zigirski).  He is survived by his beloved sister, Deborah Wianecki-Dadu, his nephew, Abed Dadu, brother in law, Usama Dadu and his aunt, Norma Bruno of Toms River.

Funeral Arrangements under the direction of Nazare Memorial Home, Inc., 403 Ridge Road, Lyndhurst.  Please use the Tribute Wall to offer condolence to his family.