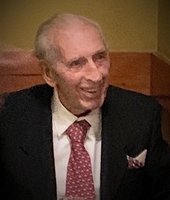 McCafferty, John Convery., 95, died on Wednesday, June 24, 2020.  Mr. McCafferty was born and raised in Paisley, Scotland.  He served in the Scottish Home Guard.  During WWII, in Devon, England, he was a part of the “select”  Commando Trained members of the British Royal Marines.  In 1948, John came to the States, and settled in Kearny before moving to Lyndhurst in 1956, where he has been a resident ever since.  He worked as the Production Supervisor for Monsanto, CO. of Kearny for over 40 years before retiring.  John is predeceased by his beloved wife of nearly 60 years, Rose (nee Farrell) McCafferty in August 2009.  He is survived by his loving children, Aileen Mullen & her husband, Peter, Gary McCafferty, Brian McCafferty, Kevin & his wife, Lisa, John and his wife, Cuca and Robert & his wife, Laurie, by his cherished grandchildren, Alexandra, Bridget, Brian, Kathleen (Jonah), Claire, Ryan, Brendan, Cailin, Shannon, Brianne (Ryan) and Kyle and by nine great grandchildren.  John is also survived by his sisters, Winifred Farrell, Moira Finelli and Annmarie Florio and his dear extended family in Scotland and Florida.

Relatives and friends are invited to attend the visitation held at the Nazare Memorial Home, Inc. on  Saturday, June 27, 2020 at 9AM.  Then to Sacred Heart Church, where at 11AM a Funeral Mass will be offered.  Interment Holy Cross Cemetery, North Arlington.  You can find more detailed information regarding CDC and funerals on the home page of our website.  You may express condolences to John’s family by visiting the Tribute Wall.