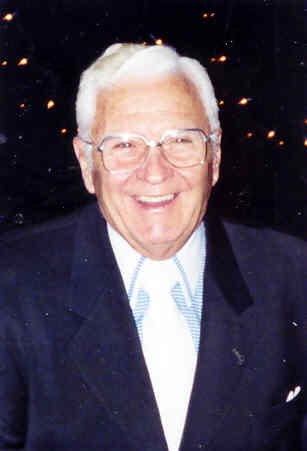 Please share a memory of Peter to include in a keepsake book for family and friends.
View Tribute Book
Russo, Peter. J. of Lyndhurst passed away peacefully at home on Saturday December 2, 2006; Beloved husband of Salme (nee Ulesmae) Russo; Loving brother of the late Alfonse J., Edward J., John A., and Albert L. Russo; Uncle of Ann M. Kurz, Carol A. Loscalzo, Virginia R. Prichett, Alberta R., John and Mark Russo; Also survived by many grand nieces and nephews. He was born in Brooklyn, NY and has been a resident of Lyndhurst, NJ most of his life; Died on Saturday December 2, 2006 at his home, Lyndhurst. He was an Army Veteran who served in WWII (1941-45) in the 69th Division throughout Central Europe. He was an Insurance Salesman for New York life Insurance Company for over 50 years. He had been a Republican County Committeeman for over 41 years. He had served as President of the Bergen County Park Commission for 6 years (1961-67). He then became New Jersey State Assemblyman for 6 years (1967-73) where he was Chairman of New Jersey State Assembly Narcotic Study Committee and the Chairman of New Jersey State Assembly Committee Clean Rivers & Environment. He was elected to the following offices: Commissioner of Lyndhurst (1961-65) and (1965-69) heading the Department of Public Works,Mayor and Commissioner (1969-73) heading the Department of Public Safety, Commissioner (1977-81) heading the Department of Public Safety, Commissioner (1989- 93) heading the Department of Public Safety, andChairman of the Passaic River Clean Up Committee He was the Congressional Candidate NJ- 9th District in 1992 & 1994. He was President of the Republican Club of Lyndhurst for over 30 years. He was a Campaign operative for: Gov. Kean, Gov. Cahill, Pres. Bush, Pres. Reagan, Pres. Nixon, Pres. Eisenhower and Goldwater for Pres. He was known for the construction of the lighted baseball field, tennis courts and the ice hockey rink, which was named after him, all of Lyndhurst. Relatives and friends are invited to attend the funeral from Nazare Memorial Home, Inc., 403 Ridge Road, Lyndhurst on Wednesday December 6, 2006 at 9 AM then to Sacred Heart Church, Lyndhurst where at 10 AM a Funeral Mass will be offered. Interment Holy Cross Cemetery, North Arlington. Visiting hours Tuesday 2-4 & 7-9 PM. In lieu of flowers, donations can be made to: Lyndhurst Republican Club, Peter J. Russo Scholarship Fund, P. O. Box 15, Lyndhurst, NJ 07071 or Hackensack University Medical Center: Hospice Program, c/o Mary Mulligan Fuzzy Fund, 30 Prospect Avenue, NJ 07601

A Memorial Tree was planted for Peter
We are deeply sorry for your loss ~ the staff at Nazare Memorial Home, Inc.
Join in honoring their life - plant a memorial tree
Online Memory & Photo Sharing Event
Online Event
About this Event

Share Your Memory of
Peter
Upload Your Memory View All Memories
Be the first to upload a memory!
Share A Memory
Plant a Tree