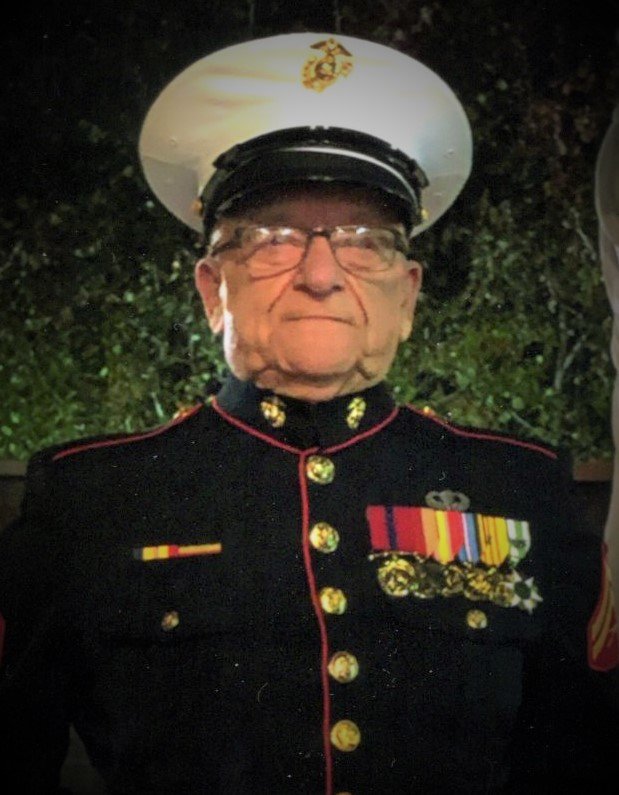 Please share a memory of John to include in a keepsake book for family and friends.
View Tribute Book

Schmidt, John V., 80, of Lyndhurst, died on Saturday, April 24, 2021 at home surrounded by his loving children.  Mr. Schmidt was born in Newark and lived in Bloomfield and Kearny before moving to Lyndhurst.  He proudly served in the United States Marine Corps from 1962 - 1967, serving two tours in the Vietnam War and receiving his honorable discharge with the rank of Corporal.  John was a Volunteer Parsippany-Troy Hills Fireman in the 1990s and also worked for the Parsippany Water Department during that time.  He was a lifetime member of the Marine Corps League West Hudson Detachment and the Jersey Skeeters Pound #136.  He enjoyed spending time with his children and grandchildren as well as playing Xbox, working on his train board, and watching horror movies.  John is survived by his loving children, Veronica Marshman (Robert), Kim Schmidt, Stan Schmidt (Gina), Gretchen Eakins (Kevin), and John Schmidt (Laura), by his cherished grandchildren, Rebecca Schmidt, Nicholas Schmidt, Robert P. Marshman, Clarissa Schmidt, John Schmidt, Jr., Dylan Schmidt, Donovan Eakins, Steven Schmidt, Ryan Eakins, Jason Schmidt, and Samantha Schmidt, and by his dear brothers and sisters, Ray, Florence, Margie, Maryann, Dee, and Joe.  He was predeceased by his brothers, Hank, Charlie, Eddie, Al, and Fred.

Relatives and friends are invited to attend the visitation at Nazare Memorial Home, Inc., 403 Ridge Road, Lyndhurst, NJ on Wednesday, April 28, 2021 from 4 - 8 PM.  All will gather at the funeral home on Thursday, April 29 at 9 AM then to Queen of Peace Church, North Arlington where at 10 AM a funeral mass will be offered.  Interment, Holy Cross Cemetery, North Arlington.  In lieu of flowers, please consider a donation in John's memory to the Marine Corps League West Hudson Detachment, 286 Belgrove Drive, Kearny, NJ 07032.  Please express your condolences to John's family by using our Tribute Wall.

Share Your Memory of
John
Upload Your Memory View All Memories
Be the first to upload a memory!
Share A Memory
Send Flowers
Plant a Tree