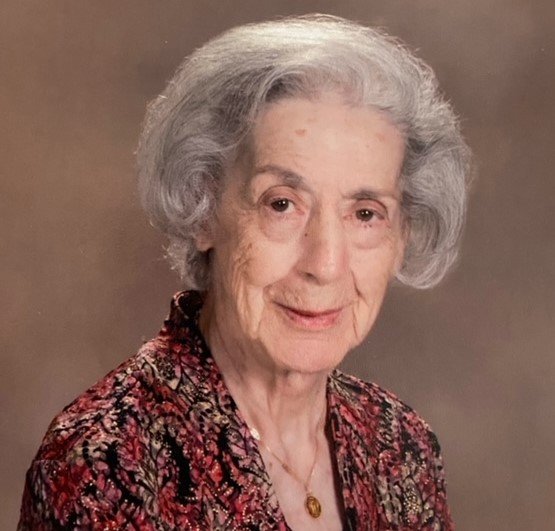 Please share a memory of Gloria to include in a keepsake book for family and friends.
View Tribute Book

Gloria Russomanno (nee Sciortino) passed away peacefully on May 9, 2021 at the age of 95 in Kearny, NJ, surrounded by loved ones. Gloria was predeceased by her husband of 64 years, James (“Jim”) in 2010. Gloria was also predeceased by her brothers, Anthony “Tony” Sciortino and Nufril “Murph” Sciortino (Dorothy); and sisters, Josephine “Pip” Shea (Edmund) and Francis “Fran” Costa (Mike). Gloria is survived by her sister Angelina “Angie” Robertson (Donald) and Carl “Butch” Sciortino (Barbara). In addition, Gloria is survived by many loving nieces and nephews and great nieces and nephews. Affectionally known to many as Aunt Gloria, she was born in North Arlington, New Jersey where she lived until her marriage to Jimmy in 1946. Gloria worked for Becton-Dickinson in East Rutherford as an administrative assistant for over 30 years. Subsequent to her retirement from B-D, Gloria worked for Harry M. Stevens Commissary at the Brendan Byrne Arena, which coincidentally, was built by blocks manufactured by Concrete Specialties in Lyndhurst where Jimmy was Superintendent. While working at “The Arena”, Gloria was known by athletes and performers as the ‘pop-corn lady’ during pre-game activities and warm-ups. Gloria never had a driver’s license but still managed to get around by walking and taking the bus, especially ‘the 102’ to her job at B-D. Aunt Gloria and Uncle Jimmy lived in Lyndhurst until they retired and moved down to their house on Westmont Ave. in Lavallette, New Jersey in 1989. Although they worked hard, what Aunt Gloria and Uncle Jimmy loved to do most was to cook and entertain especially down on Westmont Ave. It was not uncommon to have 10 people or more for dinner at the house which may have consisted of family, ‘people from Retsof’, friends, neighbors or renters from the ‘the little house’ next door. Although they owned two houses on Westmont Ave., Aunt Gloria spent very little time at the beach, rather she relished making pancakes or egg McMuffins for breakfast and then spending the rest of the day preparing for dinner. The smell of onions and garlic would permeate the house when you would come back from the beach. Gloria would be at her happiest when making one of her famous dishes, from Chicken Murphy to her renowned Eggplant Parmigiana, which was a staple at every family party. The fact that she was known as “Aunt Gloria” to not only family but also to the many friends of her nieces and nephews is a testament to the love that she and Uncle Jimmy gave to all who entered their house.

Relatives and friends are invited to attend the visitation held at Nazare Memrial Home Inc. on Sunday, May 16, 2021 from 2 to 6PM.  All will gather at the funeral home on Monday, May 17th  at 9:30AM, then to St. Stephen's Church, Kearny, where at 11AM, a Funeral Mass will be offered. Interment, Holy Cross Cemetery, North Arlington.

In keeping with her love to feed people, in lieu of flowers donations can be made in Gloria’s name to the Kearny Food Pantry Network, First Presbyterian Church, 663 Kearny Avenue, Kearny, NJ or to The St. Stephen’s Heritage Fund, 141 Washington Ave., Kearny, NJ 07032.

Share Your Memory of
Gloria
Upload Your Memory View All Memories
Be the first to upload a memory!
Share A Memory
Send Flowers
Plant a Tree